The Federal Reserve increased rates eight times in the past three years, after being effectively zero for the prior seven years. Currently sitting at 2.25% [2], many believe rates have further to rise. Standard macroeconomic theory suggests that future interest rate hikes will likely depress future stock market returns.

In a rising rate scenario with an assumption that lower equity returns will follow, it is no surprise that advisors and investors are considering more conservative equity allocations. But does this risk aversion directly translate to underweighting or exiting completely from equities? Or should investors shift to more “defensive” sectors that are viewed to be less sensitive to market fluctuations? While playing defense sounds like a good idea in theory, the bond-like characteristics of traditional lower volatility stock sectors (e.g., Utilities and Consumer Staples) make them relatively more susceptible to rising interest rates. The result is negative excess return vis a vis the broad market, all else being equal. But does this imply that the opposite trade—investing in high-beta stocks—will outperform during periods of rising rates? Using the S&P 500 Index as the broad market, the S&P 500 Low Volatility Index as a low-vol proxy, and the S&P 500 High Beta Index as a high-beta proxy, we were surprised to find that higher beta tends to outperform both low volatility and the broader market in months when rates are rising, based on the historical data.

To measure the impact of rates on equity returns, we calculated the sensitivity of these portfolios (low-vol and high-beta) by regressing the monthly excess returns over the S&P 500 against the monthly changes in 10-year Treasury rates. Low volatility had a slope coefficient of -3.05%, implying a negative relation with changes in the 10-year rate. In other words, for every 1% increase in rates, low volatility underperforms the broad market by 3.05%, on average. High beta, in contrast, displays a monthly excess return of positive 5.1%, on average, given a 1% increase in rates. Both slope coefficients are significant at a 99% confidence level. Exhibit 1 shows these sensitivities along with the average excess return during rising and falling interest rate environments. 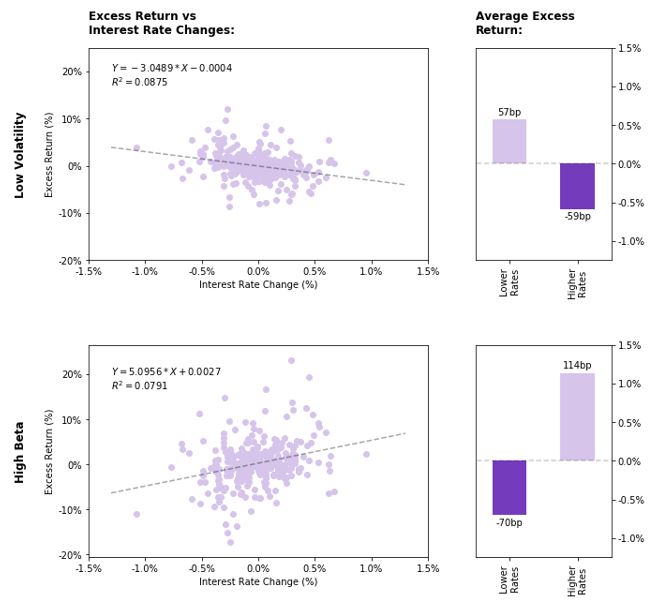 Source: Bloomberg, Salt Calculations. Data from November 30th, 1990 till September 30th, 2018. Index returns are total return, including dividend reinvestment. Past performance is not indicative of future results. Actual outcomes in a rising rate environment may vary from the sensitivity charts shown above.

Potentially more interesting is the magnitude at which high beta responded to interest rates. In months where rates rose, high beta stocks outperformed the S&P 500 by 114 basis points (bps), on average (see Exhibit 1, right column). In contrast, lower volatility stocks only outperformed the S&P 500 by 57 bps in declining rate months. Furthermore, the differential in performance in rising rate months averaged 173 bps for high beta over low volatility compared to just 127 bps for lower volatility over high beta in the lower rate months.

The popular assumption that all rising rate environments are bad for stocks is not supported by the evidence. According to a recent study by Vanguard [3], during the 11 periods of rising rates from 1967 through 2017, S&P 500 returns were negative in only one (February through July 1974). The other ten were positive and most were close to or exceeded the 10% annualized return for the market since 1925. While a return to the inflationary late 1970s would be disastrous for stocks, there is little evidence to support this scenario either. The latest CPI figures indicate an annualized 2.7% inflation rate, which is marginally higher than the 2.5% average since 1990 [4].

Unless we are heading back to the days of bell bottoms and gas lines, a rise in rates to some moderate level in response to higher economic growth may not be the worst thing in the world for equities. Combined with some tactics to minimize the risk in bonds such as shortening duration, an allocation to some higher beta stocks can help diversify your portfolio and stay invested as interest rates tick up. As the saying goes, it’s all about time in the market, not timing the market.