Does Market Timing with Trend-Following Signals Work? A Statistical Perspective

Market timing sounds great in theory. Who wouldn’t want to be in the market on the way up and out before the market turns south? The SPDR S&P 500 ETF (SPY) has recently moved back above its 200-day moving average, potentially tempting investors towards these types of strategies. But are they a reliable strategy or simply a marketing gimmick?

Pacer’s Trendpilot is a leading provider of packaged strategies designed to time the market based on trend-following signals with several ETFs available in the market, serving as a bogey for all investors looking to implement a market timing strategy, not just those invested with Pacer. Launched back in 2015, these ETFs are designed to be fully exposed to the benchmark equity index when the trend is accelerating and allocated to Treasury bills in a deteriorating market trend. Since launch, they have done exactly as advertised, switching to Treasury bills three separate times. The most recent switch was on October 31st, 2018, going from 100% market exposure to 100% Treasury bills.

Was Moving to Cash the Correct Decision? 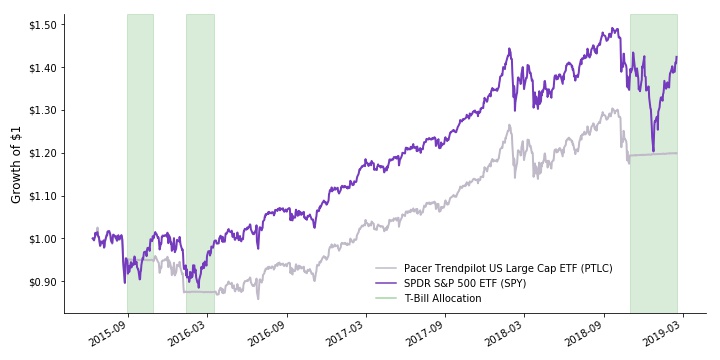 PTLC, the largest of the suite with $1.7 Billion in assets, is closing in on its fourth birthday. In this time, it has returned 5.06% on an annualized basis, trailing SPY‘s annualized return of 10.10% over the same time period. [1] However, the objective of a market timing strategy using trend following is to reduce volatility while not giving back too much of the return, thus increasing the risk-adjusted return. PTLC did indeed have lower volatility over this period (11.1% vs. 13.9%). However, the three switches to Treasury bills dramatically lowered the return, making its risk-adjusted return come in far lower than that of SPY (Sharpe Ratio of 0.43 vs. 0.70).

Giving PTLC the benefit of the doubt, a four-year time frame isn’t all that long. It also coincides with a strong period for equities, offering PTLC limited opportunity to shine during a less benign market environment. However, even if the ETF had been around for 10 years, this would still only represent one possible experience (or path) for an investor to judge the strategy’s robustness. Using a single path is to assume the future will unfold exactly as it has in the past, a poor assumption at best. The purpose of a backtest is not to describe the past performance. Rather, it is meant to form an opinion about the strategy’s characteristics in the future before putting money at risk.

Statistically speaking, there is no way to form an opinion as to whether a market-timing strategy increases risk-adjusted returns with only one path. For example, flipping heads once does not provide enough information to assert whether you have a fair coin. However, flipping the same coin 200 separate times, resulting in 99 heads and 101 tails, tells you with almost certainty that it is a fair coin. One single backtest (or live experience) does not provide enough information to assert whether your strategy is a hero or a zero. Therefore, a simulation can be applied in a similar manner to that of the coin example to form an opinion on the efficacy of market timing a trend-following signal.

Bootstrapping, a statistical resampling technique, randomly selects chunks of a known return series, such as the S&P 500, and then stitches them together to make a new time series. The resulting time series represents one possible investor experience. Moreover, it keeps some of the well-known behaviors of markets intact. First, markets have fat tails. This means you should expect large market moves, both positive and negative, to have a greater probability than a normal distribution would imply. Second, they exhibit a characteristic known as autocorrelation. Simply put, this means there is some tendency for tomorrow’s return to be influenced by today’s return.

The results tell a concise story. Using the trend indicator to switch between equities and cash, defined as 1-month T-bills, does lower the volatility when compared to a buy-and-hold strategy. However, they also show that returns take a sizable hit, resulting in a slightly lower average Sharpe Ratio. All differences are statistically different from zero at the 99% level, implying there is an actual economic difference between these two strategies.

One positive takeaway is that moving in and out of the equities reduced the maximum expected drawdown from about 32% to 27%. Some investors cannot stomach the sight of their account values dropping in times of market turmoil, making this a potentially good alternative despite the 3% lower expected return. But for those investors that understand the long-term benefit of staying the course, a buy-and-hold strategy appears to have the leg up on this simple market-timing strategy.

The live track record of PTLC is not nearly long enough to argue it will underperform over the long term. But even with a longer live history, this is only one possible investor experience. Using a simulation approach that accounts for more randomness in market dynamics allows us to build a statistical opinion around the efficacy of not just this strategy, but any back-tested rules-based strategy. The data suggests the strategy behind PTLC’s underperformance since inception, in terms of both lower absolute returns and lower Sharpe Ratios, is consistent with what long-term investors should expect. That said, sometimes the best investing strategy is the one the investor can stick with for the long term.